I couldn’t really bring a gift with me. What could I really bring that he would need whilst our here we didn’t already have?  Also there was no way I could keep something hidden in my bag without him noticing. So I decided to message some of his friends and family and ask them to record a birthday message for him. So I could play them all to him on his birthday. I was really excited to play them to him, as he had no idea… I was so happy to see his reaction. I love being a massive cheese ball gimp. Even though we were so far from home, I still wanted to give him a real gift on his birthday.

The best present Sam received was some money from his parents towards doing something a bit special on the trip, so we booked two nights in a beautiful hotel and booked a restaurant for tasting menu. Something a bit upscale from the street food we normally eat. So thanks David and Geraldine, because I got to share that gift 50/50.

After breakfast, we got a Tuk Tuk over to our new posh digs. We were staying in the most stunning hotel. I think I shed a tear when we had to check out. Our room was the size of all the other rooms we had stayed in combined. I didn’t want to leave the room, but we had to head out for some food and to get a massage. This time a full body massage.  We opted for an hour with oil. We thought that would be more relaxing than some of the Thai massages we had seen some people receive in Thailand. We were again wrong. I couldn’t relax; the woman who was violently rubbing me was on the phone half the time. Also she kept moving on the matt and it sounded like a fart, and as I’m 5 years old, I find farts absolutely hilarious. When  we were in Mexico, an elderly couple were walking in front of us one day and the woman let one drop, she just went “oh scuse me”. We had to quickly turn around as we were laughing so much. Not only is she my hero, that’s actual relationship goals right there! The massage felt like some painful deep tissue sports massage. I get some masochists are into these types of massages, not me. I want to come away relaxed, not feeling like a need to held and cuddled afterwards. Once the massage was over, I couldn’t look at Sam because I knew as soon as I did I would burst out laughing. Which of course I did.

Sam wanted to eat somewhere a bit fancier for his birthday, and we decided we wanted to try a place with a tasting menu. After searching online for a while, we booked a table at what Tripadvisor told us to be the second best restaurant in Siem Reap. The service at the restaurant was incredible.  We went for a 5 course tasting menu, with paring wines. I didn’t realise how much I missed wine. I literally savored every sip. When we arrived I mentioned to the host that we were here to celebrate Sam’s birthday. Once we had finished the desert, they came out with a cake singing happy birthday. This was a nice touch. We were so full, that I was almost on the verge of crying. So we were unable to eat the cake, so they kindly boxed it up for us.

We went in to a deep food coma as soon as we got back to the hotel.  I’m really glad we were able to celebrate Sam’s birthday while we are travelling.

While we were in Siem Reap we went for a drink at a nearby hostel, where someone called Karim who I went to University with runs. It was great catching up with him, as we’ve not seen each other since we left uni. It’s pretty strange seeing someone I knew so far from home. 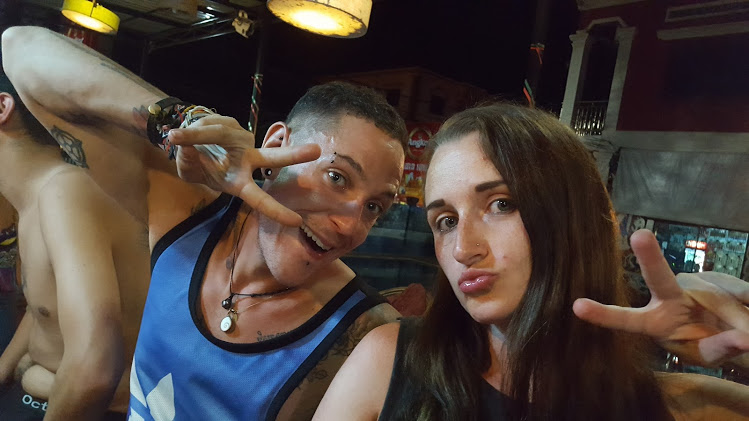 We really loved our time in Siem Reap, but it was time to move on.  Saying goodbye to the hotel was painful. Farewell my sweet friend.

The next leg our journey was a 5.30 hour bus to Phnom Penh.  Which is relatively short compared to some of the journeys we’ve been on. We’ve found the easiest way to deal with these journeys is to listen to Ricky Gervais Podcasts. Karl mentioned something not too dissimilar to the comment he made about hiaving the hair of Chinaman. As he made this comment I took a large swig of water. I knew instantly I had no other option, than to spit the water back out. I just opened my mouth and let a waterfall of water collect in my lap. The comment mixed with the fact I thought what had just happened was hilarious, caused me to start laughing, but I still had a bit of water in my mouth, so I was chocking, but trying not to choke at the same time. One guy turned around and looked like he was concerned that I was about to die there on the bus. Sam was going to ask the driver to pull over, because he thought I was going to be sick. Nope I had just laughed at something ridiculous on a podcast and spat water on myself.

I still wasn’t dry by the time we reached Phnom Penh.  Once we had checked in to our guesthouse and done the whole dump our bags routine. We couldn’t be bothered to venture too far, so went to the place across the road. Apparently in this restaurant when you order BBQ Beef, they serve you an entire small cow. I have never seen so much beef on a plate before, and I’ve been to Bem Brazil before. Not only was there a massive amount, it was insanely tasty and cooked. I feel kind of guilty for thinking, that plate of beef was more beautiful than some of the Temples we have seen. I do often think, can you have a relationship with food?! Seriously since writing this post, I can’t stop thinking about that sexy hunk of beef. I don’t care if you think it looks gross in that photo. If that came up on Tinder I’d right swipe straight away. I wouldn’t even bother looking at it’s other photos. I wouldn’t want to be put off seeing in in a group photo from that lads holiday it took last year when I’d be off put by the fact they would all be in matching vests.